The air brake system on a tractor-trailer is a complex system that includes storage tanks, a compressor, valves, hoses, and two different kinds of braking systems: service brakes and emergency brakes. Everything working together ensures that a truck is able to stop safely under any conditions. Yet it only takes one failure to create a serious problem.

If ten truck drivers were to be asked the question, ” what the most important component in a brake system?” chances are there would be ten different answers. From our perspective, however, there are three critical components that make or break every system out there: 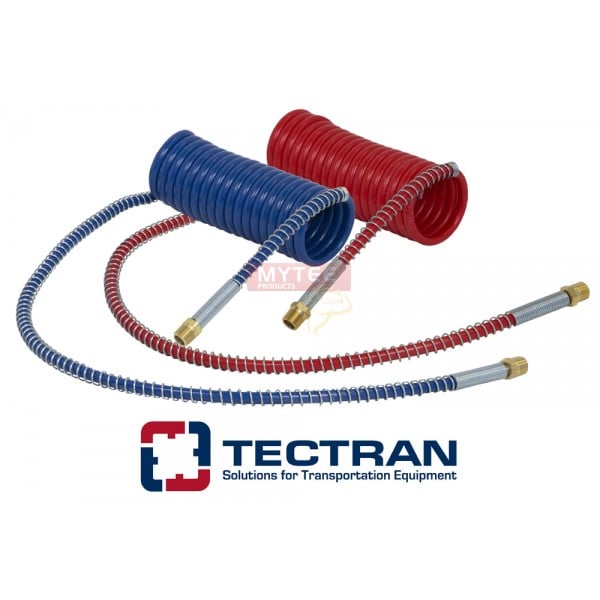 Those coiled hoses you see spanning the distance between tractor and trailer are known as truck air brake coils. Actually, two of them (one blue and one red) are hoses that work the air brake system on the trailer. The other is a cable that supplies the trailer with electric service.

Truck air brake coils are a critical link between tractor and trailer. If the two hoses and one electrical cable do not functioning properly, a dangerous situation could arise. For example, a driver could be trying to stop without using the trailer brakes, increasing the chances of a dangerous jackknife. Alternatively, a malfunctioning trailer system could deploy by itself while the truck is in motion. This could result in loss of control.

It is critical that truck drivers maintain their air brake coils in top condition. These should always be inspected prior to each journey to ensure they are in good working condition.

The emergency brake system does two things. First, it allows the parking brake to be deployed if needed. Second, it maintains a small amount of pressurized air in reserve to stop the truck just in case there is a leak in the service brake system. Emergency brakes exist in both tractors and trailers.

We include emergency brakes in our top three most important components because they provide redundancy. The last thing a truck driver needs is to attempt to stop his/her vehicle, discover he/she has an air leak, and not be able to keep the vehicle under control in order to avoid an accident. Emergency brake systems are designed to give the truck driver that needed control.

Third on our list are the air compressors that make everything work. You can have truck air brake hose coils and emergency brake systems in perfect working order that could suddenly become useless if compressors fail. Compressors are to air brake systems what fluid reservoirs are to hydraulic brakes.

When a driver steps on the brake pedal, pressurized air is released from the storage tank then moves through the hoses and into the brake system where it activates a piston that activates the brakes and linings. But releasing the brake pedal does not force the air back in the opposite direction. Instead, air is simply released. It is the job of the compressors to recharge the tanks before the brakes are needed again.

Every part of an air brake system is important, but these three components are at the top of our list. What would be on your list?