Companies such as Mytee Products sell many truck tarps to flatbed and dump truck drivers. Tarps are tools of the trade for protecting loads and meeting the regulations of the various states. We carry all sorts of products ranging from standard steel tarps to the largest and toughest lumber tarps. Recently, we have noticed a trend among truckers buying more roll tarps. These tarps are being used with different motorized rolling systems to make life a lot easier for the American trucker.

A roll tarp differs from standard steel and lumber tarps in how it is applied. Rather than being manually deployed or lowered onto a load using a tarping machine, the roll tarp is connected to a mechanized frame that rolls and unrolls the tarp with either an electric motor or a manual crank. Deploying the tarp results in the system unrolling it down its length; the retraction process works just the opposite. 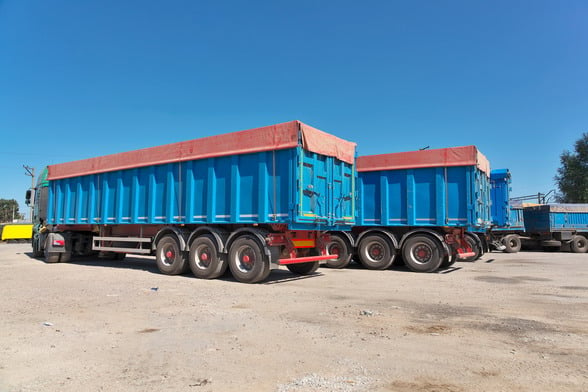 Roll tarps have traditionally been used on dump trucks and grain trailers where it is nearly impossible to safely use any other kind. However, the industry is coming up with new and creative ways to use roll tarps on standard flatbed trailers as well. Drivers choosing to go this route are finding tarping a lot easier.

Dump trucks and grain trailers usually carry loads that are not especially sensitive to environmental conditions. So why cover them with roll tarps? Because the states have laws in place requiring load securement in order to avoid anything flying off the truck or trailer and striking a car following behind. A dump truck carrying a load of gravel provides a good example.

If that gravel load is exceptionally dry, the wind could pick up a few pieces of rock, which could then fly off the load and strike a car. Even a small rock can break a windshield at 60 mph. At the very least, such an incident would result in damage to the car that needs repair. In a worst-case scenario, the shock of the event could cause the car driver to lose control and drive off the road. This is why the states require dump truck and grain trailer loads be secure.

Flatbed truckers can now use roll tarps by combining them with sidewall systems. Some of the most popular sidewall systems include a set of aluminum posts and panels that can be assembled around the perimeter of a flatbed trailer in mere minutes. Another popular system uses framing similar to what you might find on a covered wagon. In either case, once the sidewall system is in place the roll tarp can be deployed with little effort.

Flatbed truckers seem more willing to invest in these kinds of systems because they are:

Another factor flatbed truck drivers have to consider is the time it takes them to deploy and remove a tarp. If using a standard tarp takes 30 minutes while using a roll tarp takes five, that’s an extra 50 minutes on each load the trucker isn’t spending on dealing with tarps. That time can be spent turning the wheels instead.

Mytee Products offers a selection of roll parts for truckers. All of our tarps are made with the highest quality materials and are compatible with most standard roll systems.