Which is better for car transport, chains or winch straps? This question has been debated for decades. It turns out that there is no right or wrong here. It can be a bit of a predicament to judge which products benefits outweighs the other as all that matters is that the straps are used properly to protect and secure the car being transported.

Having said that, transport chains seem to be the preferred tool of choice among companies that specialize in mass car transport. Smaller companies who transport single vehicles for individual owners tend to prefer the winch straps. Let us step back and look at both. Each has its advantages and disadvantages.

Transport chains were the industry-standard before webbing straps were introduced to the freight forwarding industry. Chains are strong, durable, and more than capable of handling the weight of heavy cars. Using them for car transport is not difficult either. If you can use a hook and a ratchet, the system is pretty simple.

Here are some things to consider:

Automakers now build hook mounts into their vehicles as a matter of course. Two mounts are located at the front of the frame, usually on either side of the radiator, while rear mounts can be found near the rear axle. A driver simply hooks a chain to each of the mounts and tightens it down with the ratchet. 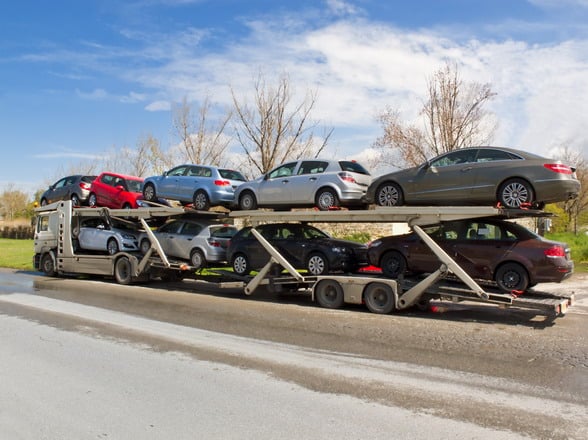 The biggest disadvantage of using chains is the possibility of damaging a vehicle by ratcheting them too tightly. A chain should provide just enough tension to keep the vehicle secure without pulling on it. Chains that are too tight can bend frames and do other sorts of damage.

The other concern of using transport chains comes by way of drivers that might be unaware of the hook mounts. Without this knowledge, they may choose to hook chains to axles or bumpers, causing significant damage once tension is applied. If chains are to be used, drivers need to be educated on how to use them.

Winch straps can be used for car transport by securing them around wheels. Straps are considered safer and significantly less damaging to cars, so manufacturers are beginning to look at mandating their use for new car transport. As long as the straps are used properly, they keep the vehicle just as secure as chains while mitigating the risk of damage to axles and frames. The flexibility of the straps also enables a minimal amount of movement to accommodate road shock.

As with transport chains, winch straps can be installed improperly. For example, allowing a strap to come in direct contact with wheel rims can scratch the finish or do other types of damage. Axles can also be damaged if tension is not applied evenly to all four tires. Having said that, the industry sees very few problems with winch straps overall.

As a truck driver, you may have to decide between transport chains and winch straps – even if you are not transporting cars. It is a good idea to thoroughly research both options along with the implications of using each one. Remember, the right tool for the load will make your job as a truck driver a lot easier.