Here at Mytee Products, we sell all kinds of truck tarps. We have steel and lumber tarps for the most common flatbed jobs. We also have smoke tarps, machinery tarps, and even mesh tarps that can be used for a lot of different applications. The secret is choosing the right tarp for the job at hand.

Note that the various tarps we sell have a multitude of uses. All our tarps can be divided into one of two categories: cargo protection and cargo control. Despite what you may have heard, they are not the same thing. Trying to use a tarp as a cargo control tool when it is not intended to be used as such can lead to big problems. 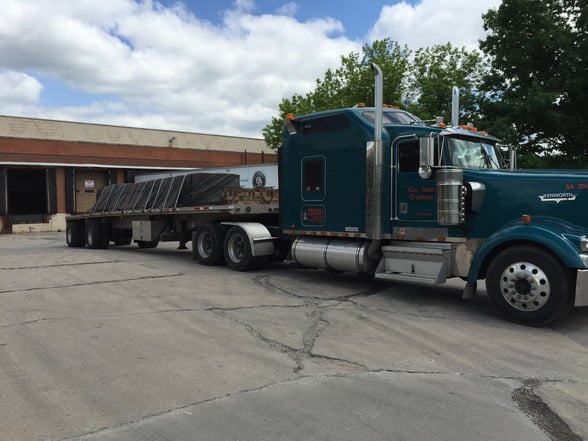 The federal government along with all 50 states have regulations in place requiring every motorist, regardless of the vehicle being driven, to properly secure any cargo that could otherwise dislodge and fall from the vehicle. This obviously applies to truck drivers. Flatbed truckers are required by law to secure not only their loads, but also any equipment and supplies they normally carry on their trailers for work use.

Cargo must be controlled by appropriate means. Let’s say you’re hauling a load of pipe, for example. The pipe has to be secured in place using webbing straps. In most cases, wooden frames are used to stack multiple layers of pipes while preventing them from shifting. It would be unsafe and illegal to attempt to secure a load of pipe using tarps alone.

On the other hand, let’s say you are driving a dump truck full of crushed stone. The dump itself contains the stone on four sides. You would deploy a tarp over the top to keep any of the material from flying off during transport. In this case, your tarp is being used as a cargo control tool.

The line of distinction between cargo control and protection might be a fine one, but it is an important one to the flatbed trucker. Getting back to that load of pipe for a minute, it is already secured with wooden blocks and straps. So why the tarp? To protect the pipe from the elements and road debris.

It is not uncommon for shippers to demand loads be covered by tarps during transport. They have a lot of money invested in the products they are shipping, and they expect those products to be protected. That’s why we sell so many kinds of tarps. Steel, lumber, and smoke tarps are not intended as cargo control tools. They are made for cargo protection.

One last thing we want to address in this post is the use of mesh tarps in trucking. Mesh tarps are typically used for providing shade and privacy, but they are also invaluable for certain kinds of loads. That same dump truck driver who uses a blue utility tarp to keep aggregate in place might choose a lighter mesh tarp instead.

Mesh tarps are also ideal for transporting roll-off dumpsters and yard waste. Keep in mind that waste haulers also have to prevent their loads from dislodging and flying off during transport. Yet because they have nothing valuable to protect, they can use lighter and more easily deployed mesh tarps rather than having to use their heavier counterparts.

Every tarp we sell has a purpose. We stock so many because we have come to realize that truckers like choices. The more variety we can offer, the better we are able to help truckers do their jobs.