The internet is a great source of information for new flatbed drivers trying to figure things out. But it can be somewhat amusing to read online conversations between veterans and newbies. The newbies are desperately looking for answers while the veterans are using terms the rookies just do not understand. Sometimes they have to go back and forth for a while before both are speaking the same language.

One of the hardest things about mastering flatbed trucking is learning how to cover loads. Truckers call this tarping, and it is a critical skill for succeeding as a flatbed driver. It helps new drivers to learn the terminology so that they can have productive discussions with veterans. 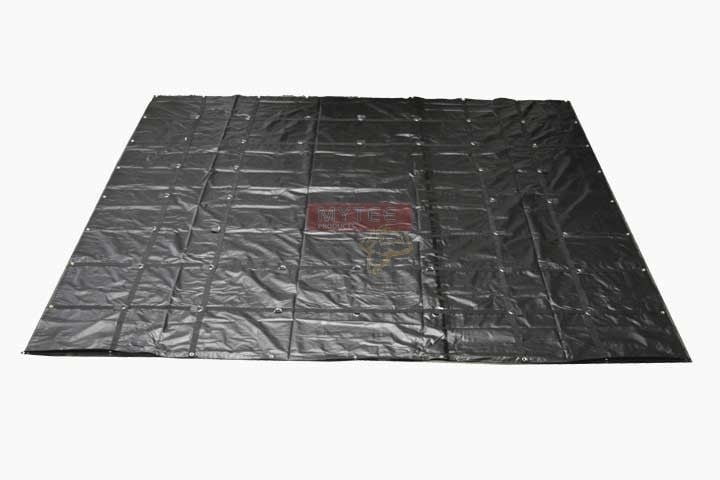 To that end, here are some truck tarp terms that every flatbed truck driver should know:

Sometimes known as a flap, the tail is an extra piece of material that hangs off the back of the load. Some tarps have an additional flap for the front, in cases when a trailer doesn’t have a bulkhead. The point of the tail is to provide that added protection at the rear. As an added benefit, the tail also helps truck drivers better position their tarps by giving them a centering reference point.

Every flatbed load has to be accounted for in terms of both width and height. The term ‘drop’ refers to the height of the load – from the bed of the trailer to the top. Let us use some simple numbers to illustrate this. A load that sits 8 feet high and 8 feet wide has a drop of 8 feet on either side. Covering the load entirely would require a tarp at least 24 feet wide. Remember that you have to account for the top surface as well as both drops.

Gussets are sewn into each side of the tarp, along the back edge. Once the tarp is folded down to cover the drop, gussets are folded across the back of the load and over the top of the tail. It is a lot like that extra paper you have when wrapping a Christmas present. You fold it over on the sides and tape it down.

D-rings are just what their name implies: rings manufactured in the shape of a ‘D’ and sewn into tarps at regular intervals. They are reinforced by extra material and stitching so that they do not pull out under load. The purpose of the D-ring is to provide an anchor point for bungee straps or a loop through which a webbing strap can be threaded. D-rings help keep tarps in place.

Last but not least is the tarping system. This term is used to describe a complete system consisting of aluminum frame, tarp, and motor used to deploy tarps automatically. Such systems are found most often on dump trucks and trailers. But they can be used with side kits as well. A tarping system virtually eliminates all the work of deploying tarps.

Now you know some of the most common tarping terms in the flatbed trucking industry, it is time for you to start stocking your truck with the tarps, straps, and edge protectors necessary for doing your job. You will find everything you need right here at Mytee Products.