If the world were perfect for flatbed truckers, every load would come already secured and covered with a tarp. The driver would simply hook up and go. However, in the world of a flatbed hauler, tarping a load is an art that requires masterful skills. A good example would be to consider, tarping loads that are too fragile for the driver to walk on. Just how does one tarp these kinds of loads? The simple answer is : Very carefully.

The reality of the situation is that, shippers who routinely deal with fragile or oversized loads tend to invest in a tarping machine that essentially eliminates the labor intensive element of applying tarps. Shippers without machines may have their forklift operators lift tarps and drop them to the top of the load. And, then there are those shippers who leave it completely upto the trucker. These are the ones you to be concerned about. The harder it becomes to cover a load, the more grueling a trucker’s job becomes. 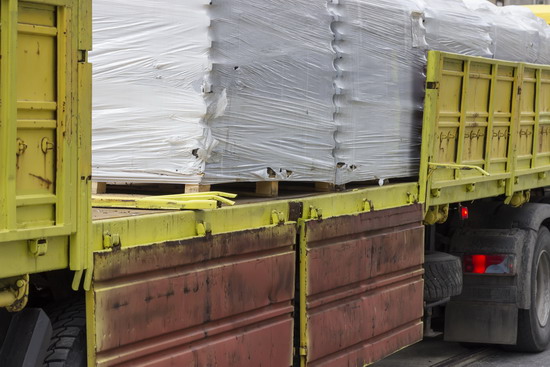 Here is a list of tips for covering those fragile loads a trucker needs to secure yet cannot stand on.

The most important tip for loads that require tarps is that, the driver should be well versed with the legal tarping guidelines which he or she may have learnt during their certification process. Some states give drivers the legal right to refuse a load if a shipper will not provide forklift assistance on a load that would otherwise be unsafe to tarp. Many fragile loads cannot be walked on and yet they tend to stack up high enough that, it would be quite impossible for a trucker to apply his/her tarps without some assistance. Knowing the law puts the trucker in a good position to protect him/herself when tarping and untarping.

One way to compensate for fragile loads is to use several smaller tarps instead of one large tarp. The smaller tarps are easier to manipulate, especially when the driver is unable to get atop the load. Although the downside of this strategy is that it is time consuming, the flatbed tarps used, do secure the load very well.

A bit of creative thinking and maybe a small investment would result in employing a pulley system to apply tarps, save time and ultimately secure a load.

The easiest tip is the one many truckers find the most difficult: just asking for help. It should not take much time to find someone else who can help you get tarps up and over the trucks load. The most important thing to remember here is to find a person experienced with tarping a fragile flatbed load.

Flatbed truckers are a creative group that can usually find a way around even the biggest challenges. When those challenges include loads that cannot be walked on, alternative means need to complete their jobs – apply tarps efficiently and effectively to secure the load.