There are lots of different ways to store hay using tarps. In this post, we will outline the steps for building a quick and dirty hay storage system that will keep your hay safe and dry without the need for a permanent structure like a pole barn or garage.

Bear in mind that this description is just a general guide. You may want to modify what you read here to better suit your circumstances. Also remember your main goal: to protect hay from the elements so as to reduce spoilage as much as possible. Unprotected hay can suffer spoilage rates of up to 20%, making for significant losses in an exceptionally bad season.

To build your quick and dirty hay storage system, you will need hay tarps, rope, and PVC piping. Spiral anchor pins are optional if you would rather stake down the tarp rather than running rope under the bales of hay. 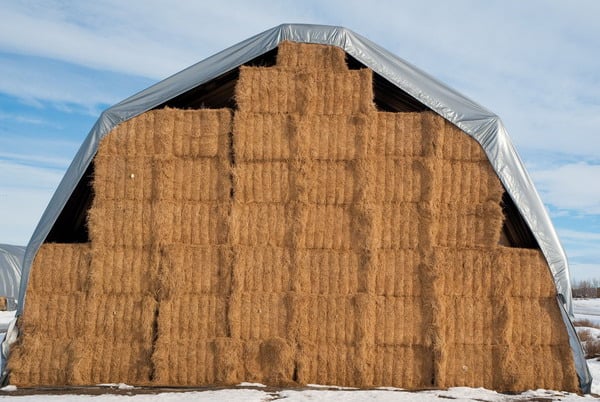 One last thing before we get to the build: depending on how you build your system the hay storage system designed here work best with round bales and square bales stacked in a pyramid. Use your own discretion when building your system.

The first step is to measure out the storage space. A 28-foot tarp should be good for 70-75 bales of hay stacked in a pyramid configuration. You can place the first layer directly on the ground or lay down some gravel first, it’s up to you. Most farmers just go straight to the ground.

Once your storage space has been measured out, lay ropes across the space at 3 foot intervals. You will eventually be pulling these ropes up and using them to secure your tarp, so leave some excess. Now you are ready to begin stacking your hay right on top of the rope.

When stacking is complete, you are going to lay PVC pipe across the top of the stack to prevent the tarp from directly contacting the hay. This is important for allowing air flow to move over the top of the stack. If you don’t do this, you could get moisture build up that could promote mold or mildew growth in the top few inches of the pyramid.

Next, stretch your tarp out on the ground. With someone to help you, you can now lift the outside edge and pull the tarp up and over the entire stack. Do your best to center the tarp before tying it down. Also, do not worry too much if the tarp seems a bit too small. It’s better to have less tarp to work with than too much.

Next, string the ropes through grommets in the tarp and tie everything off. Your ropes should have enough tension to keep the tarp taught. The lower edge of the tarp should be positioned just slightly lower than the widest point of the stack in order to allow rain to run off.

Lastly, insert PVC pipe where the tarp makes contact with the first layer of hay. The tarp should already have enough tension to hold the pipe in place. The idea here is to replicate what you did at the top of the stack: keeping the tarp from making direct contact with the hay.

If you did everything correctly, you should have a complete stack of hay properly covered and secured against the elements. After installation though, it is important to check the tension of the ropes every week or so. Your haystack will settle somewhat, so you will need to tighten the ropes throughout the storage season.