Shopping the Mytee Products website affords you the opportunity to buy all sorts of parts and tools; this includes ratchets. Just in the cargo control section alone you will find ratcheting winch bars and ratchet straps. Making all of these pieces work is a bit of technology that has been around for centuries.

The tried and true ratchet is one of the most used tools in the world. Socket wrenches utilize them. So do clocks, locking mechanisms, and so much more. If it weren’t for the ratchet, a lot of the tools we now take for granted wouldn’t be possible. To illustrate just how important the ratchet is, we will explain how it works in reference to some of the cargo control supplies we carry. 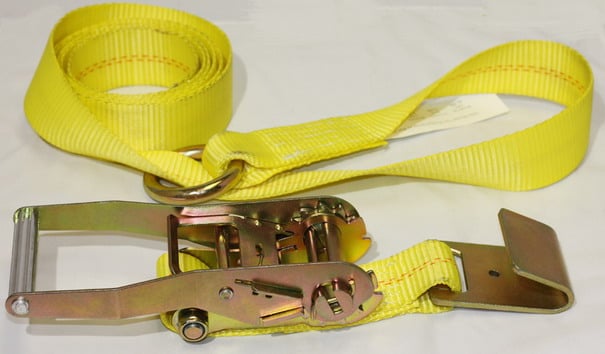 The word ‘ratchet’ is sometimes used incorrectly to refer to a socket wrench. While a socket wrench certainly relies on a ratchet, the term is a lot more general than that. A ratchet is literally a mechanism that allows for continual rotary or linear motion in one direction only. Its design prevents motion in the opposite direction.

With this definition to hand, just look around your truck and see how many ratchets you can identify. Believe it or not, the winches bolted to the side of your trailer employ a ratchet mechanism to keep webbing straps tight.

Look at the side of the winch and you’ll see a gear with multiple teeth. You will also see what is known as a pawl. This is the small metal piece that catches on the flat side of a tooth in order to prevent the gear from moving in the opposite direction. The combination of these two pieces is all that’s necessary to make the device a ratchet.

When you tighten your straps down you know you can only tighten in one direction. Every time the pawl passes another tooth, the strap gets tighter. Get it tight enough and the pawl will catch under one of the teeth to prevent the strap from unwinding.

The ratchet winch bar we carry works on the same basic principle. At the end of the bar is a square housing that holds a ratchet device. You insert the ratchet into the handle of the winch and secure it with a pin. Now you can tighten down your winch straps without ever removing the bar. When you’re done, pull out the pen and remove the bar.

In both cases, the same principle explained above applies. The ratchet mechanism consists of a gear and a pawl that allow for motion in only one direction. You use the standard winch bar to crank down on the winch, then you remove the bar at the bottom of the stroke. Slide the bar back in at the top of the stroke and repeat the process.

In order for the ratchet to work as a cargo control device, there has to be a way to release it. Thankfully there is. The pawl on nearly every kind of winch device can be released with a spring-loaded lever. This allows for motion in the opposite direction so that you can loosen webbing straps enough to detach them.

Now you know the basics of how ratchets work. It’s a good thing we’ve got them in stock, or your job as a truck driver might be a bit more difficult.