We are now well into the start of the summer season. That means hay growers around the country are already looking at the first harvest. Now is the time to start thinking about storage options for the 2018 season. How growers store their hay partly determines what kinds of losses they will experience as a result of the forces of nature. As always, moisture is a crucial factor.

We sell a variety of moisture testers that make it easier for growers to achieve that perfect balance that minimizes hay losses. But a moisture tester alone will not do the trick. Growers also need to use a bit of common sense when it comes to storage. Whether hay is stored in the field or brought into a covered area, it has to be protected against both drying out and excessive moisture. 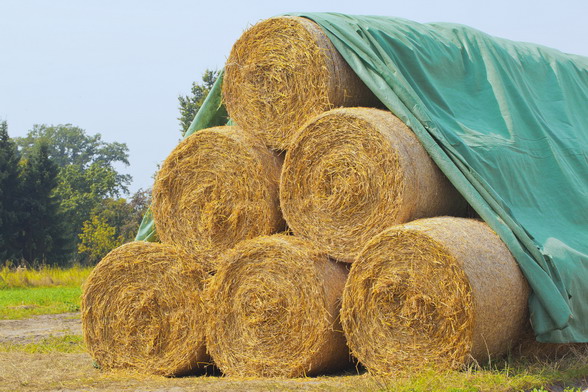 Storing Hay in the Field

The least expensive and labor-intense way to store hay is to leave it in the field as rolled bales. This method is actually pretty common for the first crop of the year. In climates where three crops are grown, the second crop may also be left in the field. Field storage is fast and easy, too.

One of the big dangers of storing in the field is losing too much of the crop to dry matter loss. However, dry matter loss is easily controlled by getting hay up off the ground. Allowing hay to remain in contact with the ground can lead to losses of up to 30% or more under normal circumstances. Fortunately, breaking contact between hay bale and the ground is not difficult. Growers can roll finished bales onto pallets, blocks, or even tarps. Another option is to store hay on a layer of gravel.

Storing hay in the field also exposes it to precipitation, and that is where a good moisture tester becomes important. Hay allowed to get too wet is subject to both spoilage and spontaneous combustion. Throwing a temporary hay tarp over exposed bales might be necessary if the weather turns especially ugly and stays that way for a while.

Bringing hay out of the field to store it under cover is generally considered the best way to protect a crop and minimize losses. But it is also expensive if you don’t already have a structure in place. Building a barn is not an option for a lot of growers, many of whom turn to temporary storage buildings like the ones we sell.

Another option for bringing hay out of the field is to stack it in large quantities and then cover the entire stack with tarps. This is a strategy mainly used for the last crop of the year; it’s impractical for the first crop of spring. That hay needs to be easily accessible for both sale and use by the grower.

Even hay stored indoors is subject to volatile moisture levels. So again, keeping the crop off the ground is a wise idea. Pallets, blocks, and even used tractor tires are excellent storage options for getting hay elevated. The goal is to allow circulation under the hay so as not to allow mold to grow.

Experts recommend using a cost analysis reckoning to determine the most suitable option for early-season hay. In other words, determine how much it would cost per bale to implement your chosen storage solution. Take that number and compare it against the expected losses for that solution. Choose the solution that is most financially viable for you.