We don’t mind admitting that we are not experts in cattle farming and hay growing. Yes, we sell things like hay tarps, moisture testers, and fence energizers. But our knowledge of agricultural practices is limited. So it’s our responsibility to do the research necessary to make sure the products farmers actually need. In light of that, this blog post was prompted by a fascinating article published by Beef Magazine covering beef cows, hay moisture, and winter feed.

The premise of the article was this: beef cows fed high quality feed during the summer and fall months are likely to reject poor quality feed during the winter. That means improper hay storage can cause big problems for cattle ranchers. Even a farmer who simply provides feed without actually having any cattle of his own needs to be concerned. 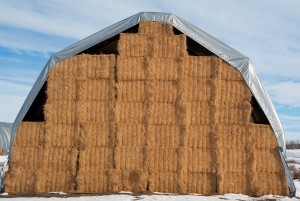 Beef Magazine’s Joe Roybal wrote in the 2013 article that cattle ranchers devote more than half their annual expenditures to winter feed. He went on to explain that hay stored outdoors tends to have a higher spoilage rate than that kept indoors. One of the things we know, thanks to our knowledge of moisture testers, is that moisture content plays a significant role here.

Moisture is both a friend and enemy of hay. You need some moisture in order to keep it from drying out and becoming nutritionally valueless. On the other hand, excess moisture promotes spoilage. It encourages the growth of mold and bacteria as well. And, of course, every hay producer knows that excess moisture can cause spontaneous combustion in stored hay.

Farmers use moisture testers to figure out just how much moisture exists in stored bales. What they do when moisture levels are too high or low is a matter of individual practice, but something has to be done in order to prevent losses. Farmers also have to be careful that the feed they sell to cattle ranchers is of the highest possible quality if they don’t want to risk future sales.

It has been estimated that baled hay stored on the ground with no cover sustains average losses of about 37%. Getting that hay up off the ground can reduce losses to under 30%, even if it is not covered. By far the best strategy for preserving hay stored outdoors is to both cover it and get it off the ground.

Hay stored indoors is subject to average losses of about 6%. However, storing hay indoors does not mitigate the need to measure moisture content. Moisture can still cause spoilage to hay stored in even the best barns.

Hay producers naturally want as little spoilage as possible so as to command top dollar for their product. Doing so is a matter of employing some practical suggestions. To begin with, getting hay under some sort of cover makes moisture easier to control and spoilage easier to prevent. Whether that means storing hay in a barn or under a tarp, it really needs to be covered.

Before covering, hay should be checked for moisture content. One of our moisture testers will do the trick. Hay that is too wet needs to be allowed to dry before it is covered. In the meantime, it’s imperative to keep rodents and other critters away.

Whether in a barn or outdoors, hay should be stacked off the ground. One trick a lot of farmers use is to stack their hay on old tires. This allows air circulation from underneath while at the same time preventing the hay from absorbing ground moisture.