To someone who has never done it before, the process of tying down semi-trailer tarps seems pretty easy. But it’s actually not. The process, also known as “tarping a load,” can be extremely difficult thanks to the weather, load sizes, and environmental conditions. Some truckers say the best way to avoid the hassles of tarping a load is to just not accept loads requiring tarps.

Unfortunately, tarped loads are part of the freight hauling trade and are better-paying loads. Every truck driver ends up having to learn how to tarp a load at some point in his career. The best ones learn to identify hazards and work around them; the rest injure themselves or generally make their own lives miserable.

Here are some of the more common hazards of semi-trailer tarps:

The first and most obvious hazard relating to the use of semi-trailer tarps is wind.It causes flapping and flapping causes tarp damage. Wind is a problem when you are putting the tarps on, while you are driving down the road, and when you are trying to get the tarps back off again. More than one truck driver has learned how to para-sail on a windy day. 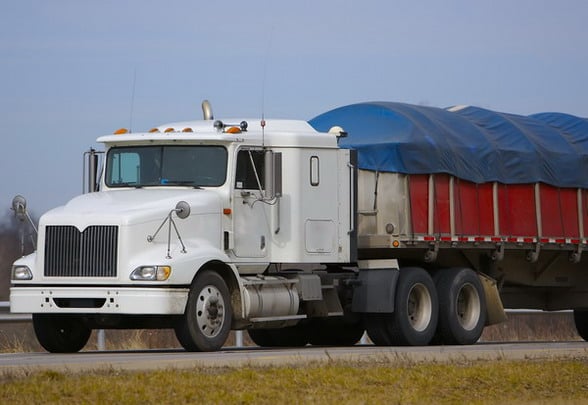 The problem with wind is that truck drivers are rarely able to load and unload in enclosed bays. Trailers are typically out in the yard when drivers come to pick them up; they deliver them same way at the other end. That means any little bit of wind can cause a major problem. Being able to tarp a load under windy conditions is a very valuable skill to have.

Oil, grease and a variety of chemicals and solvents can ruin your day if you are a truck driver. These things present problems in a number of ways. First and foremost is the very real danger of slipping and falling when you’re trying to tarp a load on a dirty slab. Such falls can result in serious injuries in a manufacturing or industrial environment.

The other problem comes by way of getting any of these undesirable substances on your tarp. Chemicals and solvents can damage canvas and vinyl to the point of ruining their water-resistant properties. That may sound counter-intuitive, given that oil and grease repel water, but it is true nonetheless. A tarp stained with solvents can be a real problem after the stains have had time to dry out.

Tarping requires proper cargo control equipment to be in place to protect the cargo and the tarp.The shape and size of a load can mean the difference between easy tarping and several hours of unmitigated misery. For example, a nice, uniform stack of steel piping can be covered and tied down very quickly. The entire tarp can be applied in 15 to 20 minutes. That is not the case when a truck driver is transporting something less uniform – like a load of CNC machines.

This kind of load might mean several different machines of varying shapes and sizes. The tarps have to be applied in such a way as to protect each of the machines without scratching or otherwise damaging them. Maybe the driver can climb on top of them, maybe he can’t. It all depends on the size and frailness of the load. Unusual loads can be a real nightmare to tarp. Heavier tarps are harder to manage and can cause injury which results in some fleet companies moving over to super light tarps

Using semi-trailer tarps to cover a load might seem fairly straightforward and easy. However, it’s not. So next time you see a truck driver going down the road with a tarp or two securing his cargo, remember that preparing the load for transport might have been a nightmare. Just be glad your job is not so difficult.