Truck tarps are good for many different things beyond protecting cargo on a flatbed trailer, but apparently catching black bears falling out of trees is not one of them. The Panama City, Florida fire department recently found that out, as did one particularly unlucky bear.

A plethora of news reports say that residents of a local neighborhood spotted a 350-pound black bear up in a neighborhood tree. They called local officials who, in turn, contacted the Fish and Wildlife Conservation Commission and asked them to send an officer to tranquilize and move the bear. It is pretty standard procedure in Southwest Florida.

At some point in the rather exciting proceedings, someone from the local fire department decided to rig a safety system for the bear that included a couple of truck tarps. They devised the system in hopes that it would catch the bear as it fell from the tree, dazed by the tranquilizer dart that would eventually be coming to greet him. What happened next needs to be seen to be appreciated.

The fire department was right in guessing the bear would fall. They were wrong in expecting the truck tarps to provide a suitable safety net. Instead of catching the tranquilized bear, the huge animal crashed through the tarps as though they were nothing more than tissue paper. It turns out that 350 pounds of bear falling 30 feet through the air is no match for your run-of-the-mill tarps.

Just for the record, the Panama City bear was fine. He was relocated to a local forest without incident.

Choose the Right Tarp for the Job

In the interests of full disclosure, it should be noted that the Panama City fire department appeared to use something other than a heavy-duty truck tarp you’d find on the back of a flatbed trailer. The news reports showed a tarp that looks more like something you would find at your local camping store, a poly tarp and not a Vinyl one. Hopefully they have learned an important lesson about choosing the right tarp for the job. 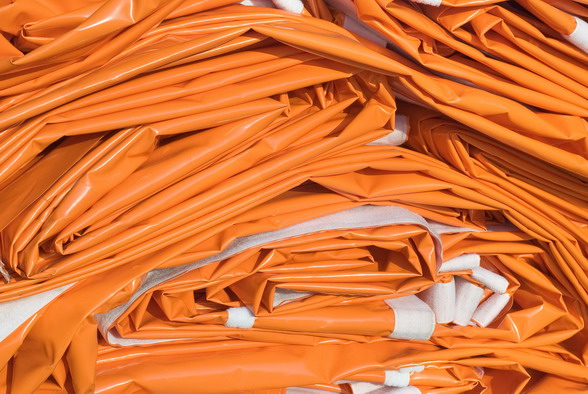 When truckers choose tarps for their loads, they take into consideration many different factors. They have to consider the cargo being covered, the length of the trip, the weather they expect to encounter, and anything that could damage their loads along the way. This includes everything from flying debris to animals.

Low-riding loads might be covered with a heavy-duty steel tarp secured by bungee cords or winch straps. A larger, bulkier load might have to be covered with a lumber tarps or still larger Machine Tarps secured with a combination of ropes, bungee cords, and bindings. It really just depends on what the particular need is at the time. It is up to truck drivers to figure out what those needs are and choose a tarp accordingly.

You may not be a professional trucker trying to secure fragile cargo for a 500-mile journey. However, if you are planning to use a tarp for any purpose, make sure you know what it is you are using. Ask questions if you have to – before you buy. Moreover, if you were part of the Panama City fire department, the local bear community would probably appreciate it if you invested in some heavy-duty truck tarps that would support their weight.