So what determines what type of load a driver will accept? Company drivers do not have much say in the matter, but independent drivers get to choose what they haul. Loads requiring tarps also require special consideration before drivers will accept them. The nature of truck tarps means there are pros and cons drivers have to consider.

Using truck tarps requires different knowledge and skill than loads contained in dry-van trailers. They require more time to secure. The driver has to make sure the tarp is secured with bungees in a way that protects the load, the tarp itself and generally meets all safety requirements. As such, tarped loads often pay more, making them more attractive to drivers who do not shy from the exertion. 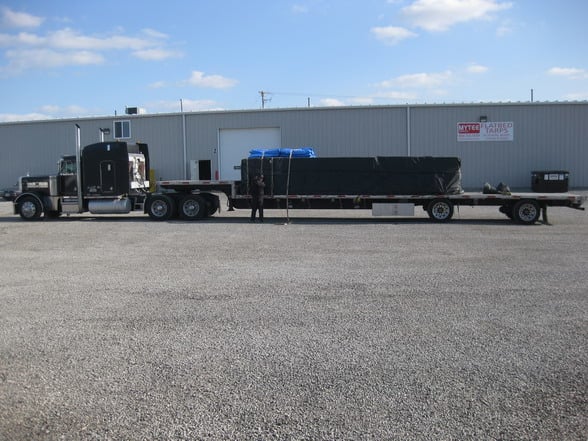 There are plenty of reasons why a driver might prefer to avoid tarped loads, beginning with the cost. The truth is that truck tarps are expensive. However, a high-quality lumber tarps will pay for itself after just a couple of loads. Drivers who take care of their tarps know they can last for years.

Advances in technology have made it possible to deploy truck tarps using motorized winch systems with automatic spreader bars. This allows the truck driver to deploy the tarp from the safety of the ground, all but eliminating the risk of injury by way of falls. An added benefit of these systems is the ability to deploy a tarp evenly across the entire surface of the load. However, it still takes time that could be put to better use on the road. Automated systems are limited to pre-set load types and sizes. They can also be expensive.

Thus far, we have talked about tarped loads as they relate to independent drivers. However, what about companies that operate their own fleets? There is a certain amount of liability that comes with using truck tarps – liability that involves both drivers and cargo. Companies go to great lengths to protect themselves through proper training, fall restraint systems, and other safety accessories.

It is true that tarping is a necessary part of the trucking industry. It is also true that drivers can make more money when accepting tarped loads. Nevertheless, like anything else, both the pros and cons need to be weighed before deciding whether to accept loads of a given type or not. That’s just part of the business.